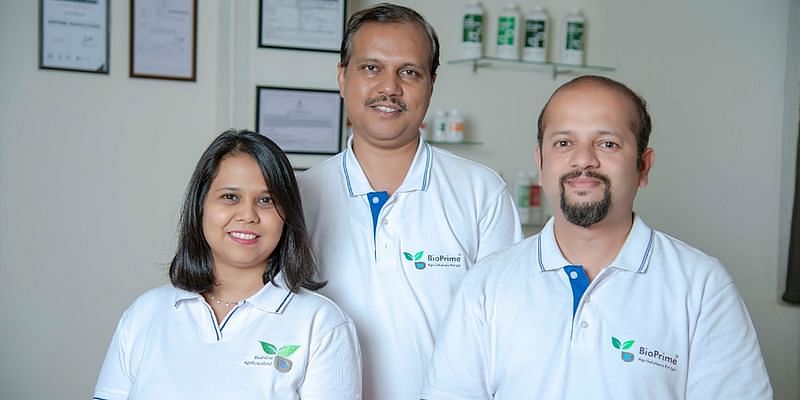 India is a global agricultural powerhouse, but over the last few years, unprecedented climate change has emerged as the greatest threat to agriculture and food security.

“In 2016, we were working with Narayangoa tomato farmers. It was the hottest summer of the past 50 years that coincided with flowering and fruiting time. and led to almost 96 percent flower fruit drop and 100 percent crop loss in 183 villages. Next year, it was a similar story where 100 percent crop loss occurred due to untimely rains in UP and Bihar. We cannot control the climate, and so decided to focus on plants and how we can make them climate-resilient,”
Dr. Renuka tells YourStory.

She says after launching Bioprime, the founding team approached the Pune-based incubator Venture Centre, which mentored the team and helped them apply for Biotech Ignition Grant from BIRAC.

Dr. Renuka says the startup, which currently has 19 team members, is involved in developing small biomolecules that can target and modulate plant responses, thereby making them climate-resilient.

Bioprime Agrisolutions sets up demonstrations in seedling industries from where most farmers purchase the planting material and show them how treated seedlings have lower mortality rates.

Its core product – Smart Nanomolecules Induced Response Modulation (SNIPR) – is a proprietary rapid, high throughput discovery platform that identifies the main problem and helps the startup develop agri formulations with defined components. It also helps the team understand its effects and mechanism of actions on plants.

The B2B2C startup claims to have worked with around 10,000 farmers in Pune, Nashik, and Akole, brands such as Delta, Finozen Nutrigation, and startups like BigHaat and Bharat Agri.

“SNIPR focuses on understanding the underlying process of the problem. It can help in radically improving upon current products and develop novel products in a more time and cost-efficient way,” Dr. Renuka explains.

The founder says that the team has raised funds to focus on its product. It received Rs 30 lakh from BIRAC’s Sustainable Entrepreneurship and Enterprise Development (Seed) Fund in 2017 and Rs 1 crore from BIRAC’s Launching Entrepreneurial Driven Affordable Products (Leap) fund in 2019-2020.

The startup operates on two models – licensing agreements and sales of products. “The SNIPR biologicals are at an early commercialization stage and the total revenue is Rs 4.2 crores. Even at an early stage, Bioprime has shown a year-on-year growth rate of 3X,” Dr. Renuka says.

According to an Imarc report, the Indian bio agricultural market stood at Rs 52,026 million in 2019 and is expected to reach Rs 66,593 by 2025. The market is populated by several players, including BASF India Ltd, Isagro Asia Agrochemicals, Syngenta India Inc., Bayer (India) Limited, and Evogene Hybrid Seeds among others.

Speaking about future plans, Dr. Renuka says Bioprime aims to launch its products in other states, including UP, Jharkhand, Chhattisgarh, Karnataka, and Andhra Pradesh.

“At present, two products that can modulate plant photosynthesis and thereby yield are at the field evaluation stage. They are expected to be launched by 2022. We are currently preparing for a pre-Series A funding round and are looking to close this by mid-2022,”
Dr. Renuka says.