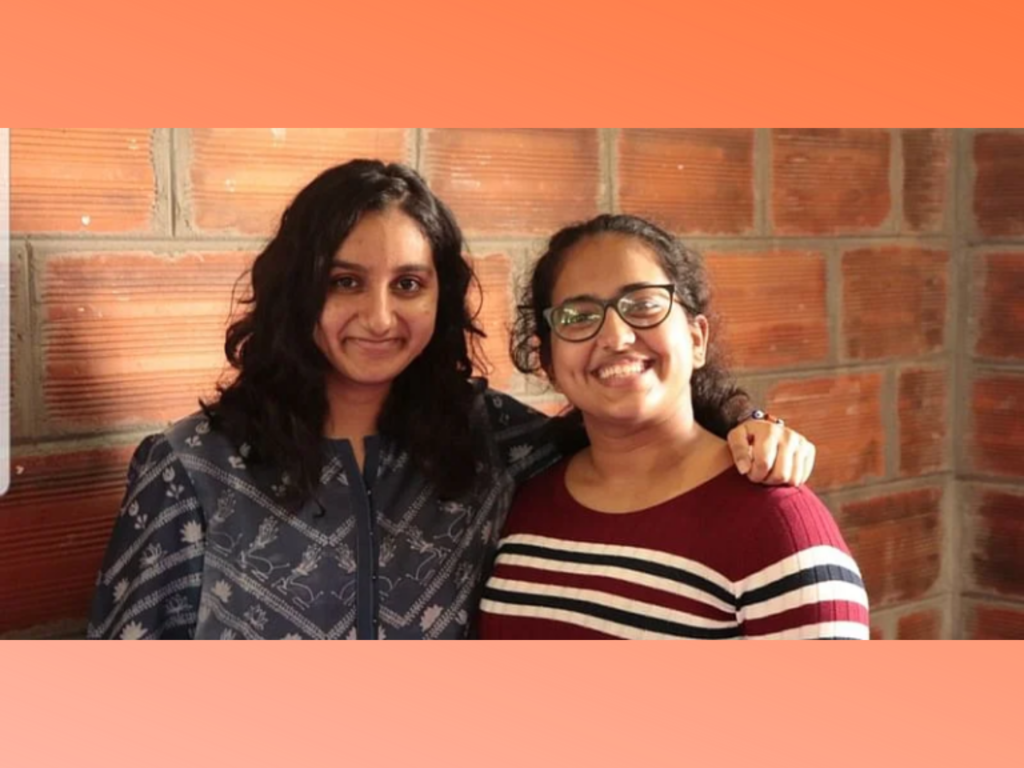 When Anitha P, a 20-year-old student, was going through financial troubles during the pandemic, she and her sisters, Amritha and Seemitha decided to discontinue their education to decrease the burden of education fees on their parents. Being in the final year of her degree programme, it would have been a major loss had she gone ahead with her decision.

But there was hope around the corner in the form of Project Arambha. Started by two 17-year-olds from Bangalore, Haneen Farid and Disha Panda, the project aimed to fight gender inequality, particularly in higher education.

The girls raised about Rs 15 lakh through fundraising campaigns to pay the college fees of 44 underprivileged girls between the age of 16-22 years in the city for a total of three academic years, including 2020-21.

In February 2020, a UN-accredited non-profit organisation called 1M1B (1 Million for 1 Billion) visited Haneen and Disha’s school, DPS Bangalore North, and held a session to introduce them to the 1M1B Future Leaders programme. The programme identifies and nurtures promising leaders of tomorrow by providing more clarity over their purpose using a framework before turning it into an actionable project aligned with the UN Sustainable Development Goals (SDGs).

“We realised that this is the one opportunity we would have to add meaning to our lives, and the lives of many other girls. Hence, we signed up for the programme in a heartbeat, and that is how Project Arambha came to be…”

Haneen and Disha are among those from over 120 students chosen to join the 1M1B Activate Impact Summit, 2021, at the United Nations Headquarters in New York.

For Disha, education was always top priority. “I want to study Economics and Business when I’m in university. While it’s easy for me to access this education, it’s not so easy for many girls out there who suffer due to lack of financial support. The fact that education is a privilege for some girls and not even a basic right for some others, is disturbing to me, and it is difficult to digest,” she says.

Haneen, a debater and public speaker by passion, aspires to study Political Science before eventually joining politics. But, she says, people have advised her against it just for being a girl.

With Project Arambha, she wants to instil hope in girls like her, by not only providing emotional support, but also financial support for their education and career aspirations.

Talking about the project, Disha says,

“We conducted two fundraisers, and tried to gain corporate sponsors as well. Last year, the Himalaya Drug Company was kind enough to sponsor fourteen girls for a total of three academic years.”

“So far, we have helped 44 girls by raising money for their education and conducting a series of career sessions to help them with resume writing, job interviews, and their LinkedIn profiles,” says Haneen.

In fact, the funds are being dispersed in the right direction with the help of 1M1B, which is guiding and mentoring them to continue the operations. Project Arambha is also in partnership with two beneficiary organisations – Sparsha Trust and the Radiant Life Charitable Trust.

Like Anitha, her sister Seemitha P also dreams big and aspires to become an IPS officer one day. She shares,

“Project Arambha has supported me in a lot of ways. The online career guidance sessions not only gave me clarity on my aim in life, but also helped me understand how to work towards my goal. The knowledge and direction I received from the seminars were valuable; it set me up on the right path. It’s hope to me.”

Challenges and the way forward

All this good work was not easy to build. Haneen and Disha say they experienced a lot of obstacles along the way, especially with fundraising.

“Even after raising about Rs 15 lakh, we are still short of about Rs 5 lakh to continue our support for the girls’ education for the current academic year. We need to acquire another corporate sponsorship to meet the required amount,” says Disha.

“We have been chasing a few corporates for the past few months to convince them to aid our cause. However, though these efforts haven’t had any real gain, we have improved our proposals, pitches, and professionalism. We have learnt a lot,” adds Haneen.

While this is just the “Arambha,” Haneen and Disha are pretty clear on where they want to reach in the next two years – educate 300 underprivileged girls and conduct career sessions for all of them so that they are able to secure their future and move up the career ladder. They hope to see the girls break the glass ceiling in their fields, and have the courage to overcome every hurdle. Disha and Haneen, while helping in the cause, are also true role models!