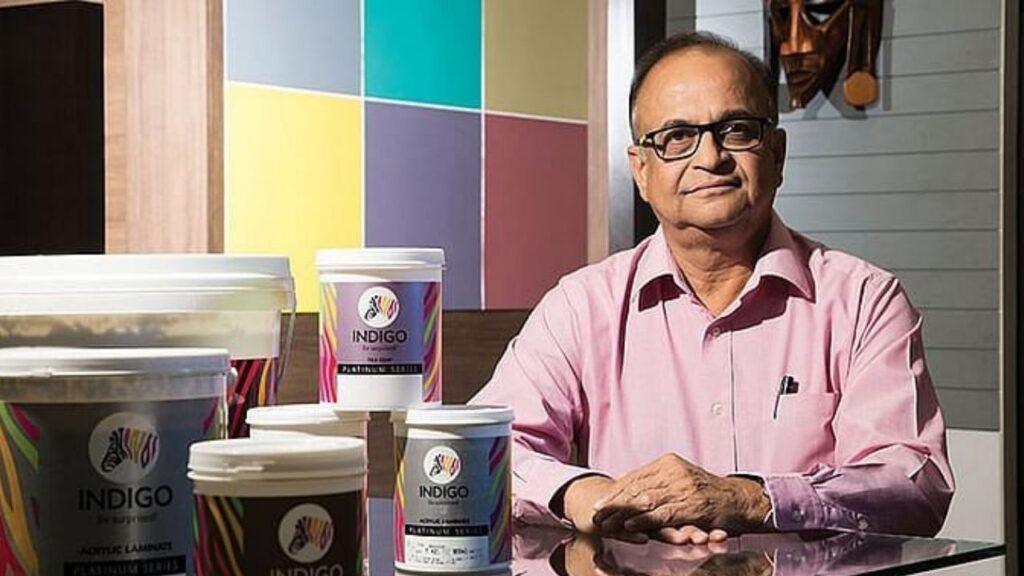 Hemant Jalan’s Indigo Paints had a modest beginning in 2000. A small chemical unit in Patna and an industrial shed in Jodhpur served as the foundation for the company. In FY20, the business reported revenues of Rs 625 crore, and in FY21, it went public.

Chemical engineer Hemant Jalan’s early days as the founder of Indigo Paints were quite different from his life before entrepreneurship.

While working with Vedanta’s Sterlite and heading its copper smelter unit in Tamil Nadu, Hemant used to take a private jet to business meetings. After starting his own business, he travelled between cities by two-tier AC train.

Started in 2000 with Rs 1 lakh, Hemant’s company Indigo Paints had a modest beginning. In his words, the company was established with “practically no capital investment.” A small chemical unit in Patna and an industrial shed in Jodhpur served as the foundation for the company in its early years.

Employing a customer-driven focus on innovation and an incentive-based approach to sales, Hemant has led Indigo to become one of India’s largest paint brands.

In FY20, the Pune-headquartered business reported revenues of Rs 625 crore with a net profit of Rs 48 crore. At present, the company has three manufacturing facilities located in Rajasthan, Kerala, and Tamil Nadu. Indigo recently went public and listed on the NSE and BSE.

In a candid interview, Hemant narrates how he took his small cement paint business and turned it into a household name.

Q. How did you go from running a large copper smelter to becoming an entrepreneur?

Early in my career, I worked with my Patna-based family business, which was into trading and distributing gas stoves and electrical insulators. I also started a chemical unit in Patna, but it suffered a setback in 1995, and I moved on.

I joined Sterlite in 1996, and I worked my way up to heading the copper smelter unit in Tamil Nadu. But in 1999, I took the tough decision of parting ways with Sterlite in Tuticorin and moving to Pune. I was 42 at the time, and that’s not the best age to start an entrepreneurial venture.

A friend was running a management consultancy and was looking for a partner. I took the plunge and worked with him for a year. This period gave me time to reflect and think of starting my own paint company in 2000.

Q. How did you get the idea to start a paint manufacturing company?

I was still running a small chemical unit in Patna. The plant made the industrial chemical calcium chloride, which was a minor chemical used in cement paint. We used to send it to cement paint makers. On the whole, the chemical plant generated around Rs 1.5 crore annual turnover.

One day, while at the Patna office, I saw and met several small-scale manufacturers who were running cement paint units. They were all doing well for themselves. I thought to myself that if they can do well in paints, so can we!

However, Bihar or the nearby state of Jharkhand were not good locations to start making paints as the raw materials had to come from Jodhpur. So I put up an advertisement in Jodhpur, looking for an industrial shed for rent. Once I finalised a shed there, I started making lower-end cement.

The business did reasonably okay — we did around Rs 80 lakh in sales in the first year. Then, we began diversifying into water-based paints and entered one state a year for marketing our products.

Q. What is the secret to Indigo Paints’ expansion?

An Indigo Paints salesman in Kerala once asked me what reward he would get if he made Rs 1 crore worth of sales in a year. I asked him what he wanted, and he said he wanted a Hero Honda motorbike. I agreed.

Incredibly, the man achieved the target and received the reward. I increased his target to Rs 1.5 crore and told him I’d give him a Tata Nano if he achieved it.

This interaction led me to realise that there was a great power in incentivising our sales force. In 2009, when we were a Rs 12 crore business, we held an annual conference for our team and set up an incentivisation programme for them. We let them choose their targets, and agreed to reward them disproportionately higher if they succeeded.

The team started setting high targets for themselves, and this changed the course of the business. We started seeing 50 percent yearly growth, and our manpower attrition dropped to almost zero.

Q. How did you finance your expansion?

As we boosted our production, we took bank loans to finance our working capital and expansion requirements. In 2014, Sequoia came on board with Rs 50 crore investment and made us debt-free.

“We could take aggressive bets in marketing and shift from cheaper newspaper advertisements to expensive TV ads. We were also able to acquire a mid-size paint company in Kerala. Sequoia invested another Rs 90 crore in us and increased their stake from 21 percent to 39 percent.”

In 2018, we onboarded MS Dhoni as our brand ambassador. He has been an important catalyst to take our story to the country and increase our brand equity. Dhoni and Indigo Paints are seen synonymously as a small-town boy who made it big in the country through patience, grit, and perseverance.

Q. What are the future plans for the company?

We are going to continue with our existing strategy, which has yielded good results. We are expanding our portfolio of differentiated products, adding to our dealer network in small towns and large cities, and continuing to add tinting machines.

We will do sustained advertising to further strengthen the brand, draw level with some larger paint manufacturers in the dealer network, and look to improve our profitability parameters.